As the summer ended and fall began, we made our way to Las Vegas to attend MINExpo International on September 26th – 28th.  There were no signs of fall weather approaching in Sin City, but that was okay because all of the action was inside the {air conditioned} Las Vegas Convention Center.  While the convention center is very large it was busting at the seams with 50 foot tall haul trucks with the ability to move payloads over 400 tons! 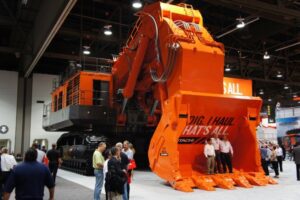 Since we were “first timers” to this show, we were amazed by the 13 foot tall tires and excavator buckets capable of fitting a dozen people inside of them. However, this was “old hat” to most of the industry professionals.  While the large equipment was a spectacle, the real focus was on new technology and innovation throughout the industry that was on display.  The main topic of interest was autonomy.  Two of the days included educational sessions on the advantages and efficiencies of using automated machinery in mines.  These sessions were taught by industry leaders from Komatsu, Atlas Copco, Caterpillar and GE Mining.  Komatsu even unveiled an “Innovative Autonomous Haulage Vehicle,” featuring a cab-less structure.  Unlike their 930E and 830E autonomous models, Komatsu has developed this vehicle exclusively as an unmanned vehicle designed to maximize the advantages of autonomous operation. Komatsu plans a market introduction in the near future.

As everyone knows, the mining industry has been having trouble over the past few years and has been fighting to bounce back. After speaking with industry professionals, the overall attitude was upbeat and positive.  The industry is continuing to invest in technology and innovation to further the mining sector.  While some are not entirely sure that they have seen the worst yet, they are optimistic that an uptick is right around the corner.  They are preparing for the future and hopeful that it will be bright.