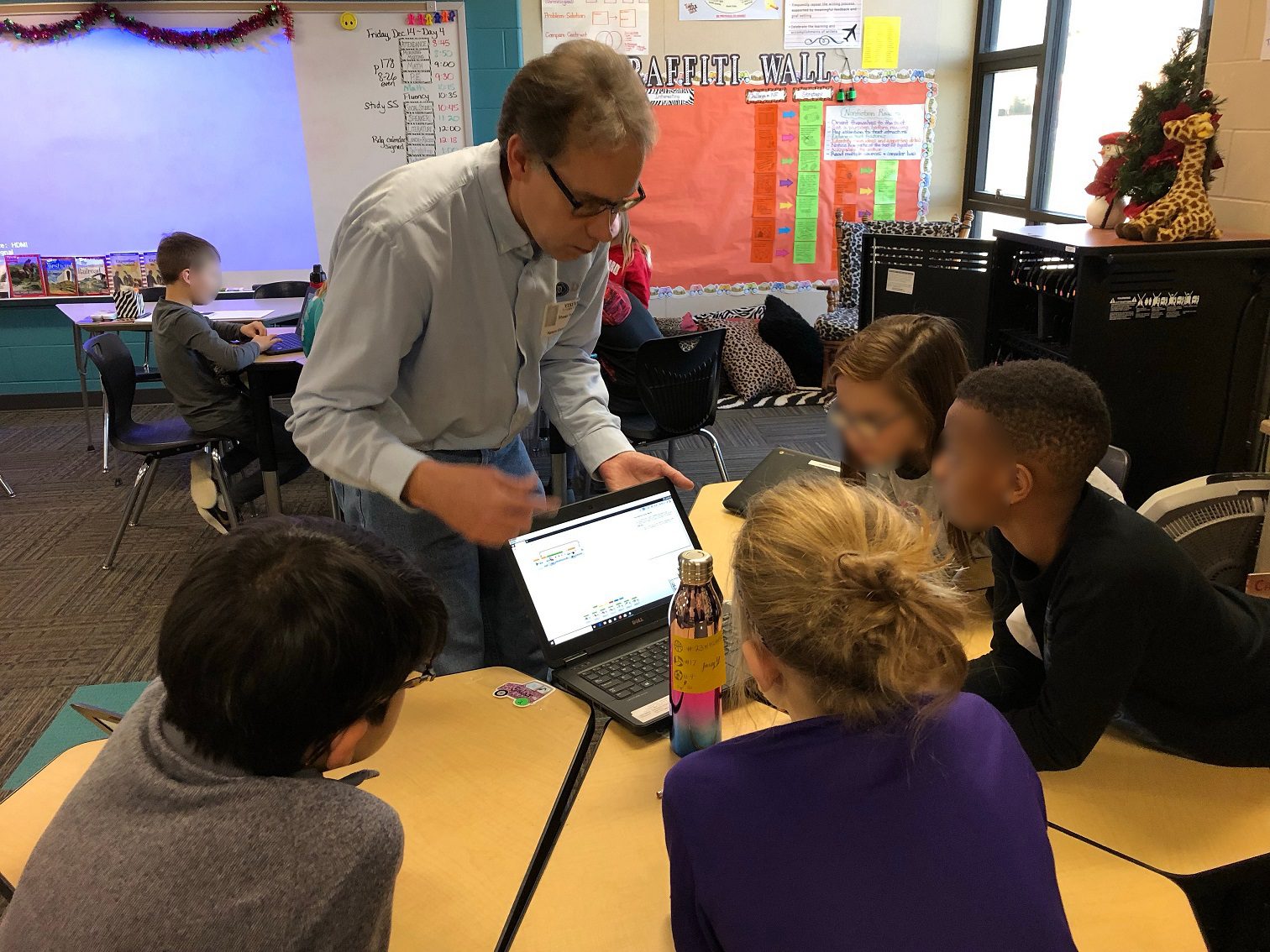 This fall I was offered the opportunity to participate in the Hour of Code activities at Cedar Falls Schools.  Given my passion for coding and developing the next generation of problem solvers/STEM professionals, I accepted the invitation and signed up to volunteer.  The Hour of Code activity is where business professionals partner with elementary teachers during December by visiting a classroom and share about their experience in coding (the computer science field) and/or work with students while they complete their coding lessons.

On Friday December 14th, I volunteered in two Hansen Elementary classrooms.  In the morning, I visited Mrs. DeGabriele’s 5th grade classroom and in the afternoon, I visited Mr. Pirkl’s 6th grade classroom.  In both classrooms I shared a short presentation of my journey to coding, starting with my first exposure to programming in 4th grade with the TRS-80 computer that my classroom had (who remembers BASIC?).  I also shared about the other computers that I used during grade school through high school (talk about outdated).  I ended by showing pictures of the different programming languages I have used at DISTek (mainly C & LabVIEW) and through my volunteering with FIRST LEGO League (FLL) and their use of EV3 programming software.

For this event, I built an EV3 LEGO robot with multiple sensors.  I created a simple program to use the ultrasonic sensor and have the robot move forward until it gets within 5 inches of an object before it stops.  Testing of this program at home had me thinking it worked well.  While in Mrs. DeGabriele’s classroom, I asked for a volunteer and then had the student stare down the robot as I placed it on their desktop and lined it up to go towards the sitting student.  The robot did not stop until after touching the student.  This failure turned out to be the best part of the experience as the class worked with me to fix this unexpected behavior.  We were able to fix the issue and prove the solution worked.  The solution was to reduce the wheel rotations between measurements by the ultrasonic sensor.

After this impromptu problem solving exercise, I helped some of the students with their coding lessons.  Mrs. DeGabriele’s class was working through code.org exercises.  This was fun, but when I was not able to answer one student’s question, I was a little demoralized.  The code.org exercises are not simple.

For the robot demonstration in Mr. Pirkl’s class, I undid the fix that was implemented in the morning thinking I would repeat the problem solving exercise, but this time, expecting the issue.  The robot chose to one up me.  This time, the robot did not stop at all when moving toward an object.  After looking over the robot, I noticed the ultrasonic sensor was not on, but decided to get the help of the class, especially given that there were some experienced FLL students present.  Once the ultrasonic sensor was working, we worked through the similar issue that was experienced in the morning, which the class easily solved.  Then we discussed if there was a better way to get the robot to stop.  We tried using the touch sensor and then discussed which was better to use in the situation (neither was perfect).

Both classes were awesome to visit.  This was a fun experience that I greatly enjoyed.