My initial exposure to FIRST robotics came when my son joined the Cedar Falls High School robotics team as a sophomore back in 2012. At that time, I thought it would be a fun little activity for him to be involved with. I really had no idea what being a part of a FIRST team meant. Boy, have I come a long way.

Now, seven years later, I do know what it means. As it turns out, there is nothing “little” about it. It is the most rewarding and inspiring thing I have ever been involved in. This past April, I had the privilege to travel to the FIRST World Championships in Detroit, MI, as a team mentor with that same high school robotics team, FIRST Robotics Competition (FRC) Team 525 – The Swartdogs, a team that is sponsored by DISTek.

In 2019, there were 3,790 FRC teams with almost 95,000 students in 33 countries. Of those teams, 406 qualified to compete at the four-day World Championships event. Those teams were split into six different divisions named after notable scientists. Team 525 was placed in the Tesla division along with 67 other FRC teams. This is the 5th FIRST World Championships that I have attended, three times in St. Louis and two times in Detroit, dating back to 2012. At each championship event I have been to, I am in awe at the number of students, mentors and spectators in attendance. While sitting in the stands on the first day of competition this year, I turned my head to the right to observe 6 playing fields and several rows of seats filled with excited students, mentors and other spectators. Looking down, it seemed as if the rows of teams went on forever.

The FRC game this year, called Destination Deep Space, consisted of 3 robots working together in an alliance to place a greater number of hatch panels and cargo pieces in a rocket and cargo ship than the opposing alliance. The culmination of the 2 minute and 15 second match was the endgame where robots parked on a multi-level platform called a habitat. Watching these teams compete at the Championship level was exceptionally exciting. The chanting and cheering by the team’s observers rival any crowd at any sporting event I’ve ever attended. Many of the students wore various hats, buttons, face paint, colored hair and tutus in addition to their team shirts to show spirit for their teams. Team mascots could be seen walking through the venue throughout the competition.

As exciting as it was to watch the competitions, there were also many other things to do at the Championships. In addition to FRC, other FIRST programs were competing. We were able to see the FLL Jr, FLL and FTC teams. Since I am also a coach for the Cedar Falls FTC teams, it was extremely exciting for me to watch that competition as well as visit the pit area of my friends on the FTC team from Denver, IA, a nearby team that Cedar Falls has partnered with and competed against for years.

Another fun activity that the team participated in included the Innovation Faire and Scholarship Row. Many companies set up booths showing off some of their great products. Many of these companies are quite interested in hiring FIRST alumni. One of the highlights of the Faire was the large LEGO Education booth. Here, we were able to see the playing table and missions for the FLL game starting later this year. Just outside of the Faire were three large tables filled with tons of only white Legos. There were a large number of students crowded around the tables, building anything that came to mind.

Each team that participated in the competition had a pit area where they kept their robot, tools and spare parts. Taking a tour of the pits is always a must for me when attending a competition and was especially true at Championships. Most teams include a lot of memorabilia about their team, showcasing all the activities they participate in outside of competition. It was so inspiring to see all the outreach and community service activities these teams have done. After talking to students and seeing their handouts, I always get the feeling that there is nothing these kids will not be able to accomplish in the future. They are the worlds future innovators, and the future looks bright! 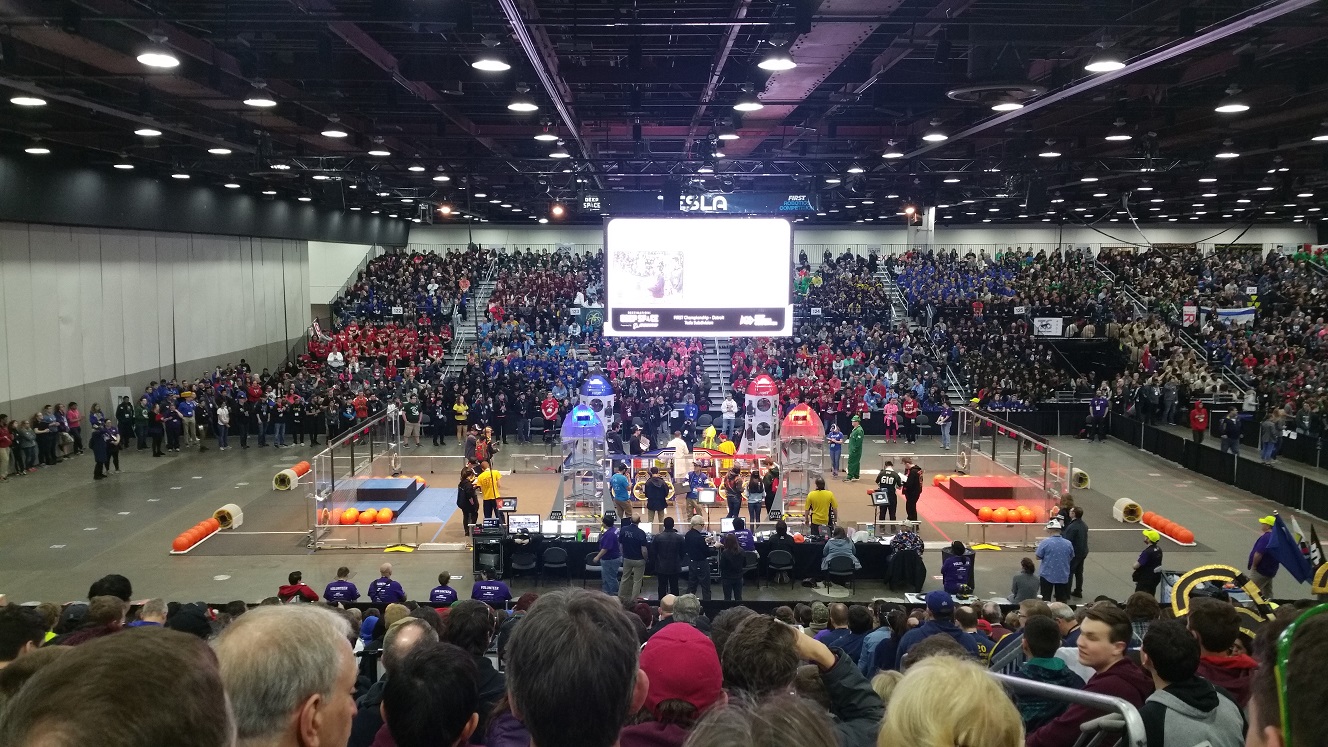 As the days of competition progressed, the top team from each division came together for a final round robin competition. All the teams and spectators headed over to Ford Field to watch the top two teams compete in one final set of best of three matches and an awards ceremony. It was fabulous to hear the students and business executives talk about what FIRST means to them. Of course, Dean Kamen, the founder of FIRST, always gives out his homework for the year. This year he asked all students to contact their congressional leaders and ask them to sponsor a bill for a commemorative coin with the teacher/astronaut Krista McAuliffe, who was killed in the shuttle Challenger disaster in 1986. As of last month, this goal was achieved!

Even though Team 525 did not make it to the final rounds, I know that each student on that team will never forget this experience. It really is amazing just to be there. In fact, regardless of which team they are a part of, each student involved with FIRST robotics obviously pours their heart and soul into their team. The passion these students hold for overcoming obstacles and thriving through challenges inspires me more than anything else. In addition to giving their all on the playing field, these students give their all in their communities. FIRST teaches them the value of teamwork, and each student treats each other as family. If the opportunity to attend a FIRST World Championship ever presents itself to you, do not hesitate to attend. The result of the students’ hard work, determination and accomplishments is unbelievably mind-blowing.