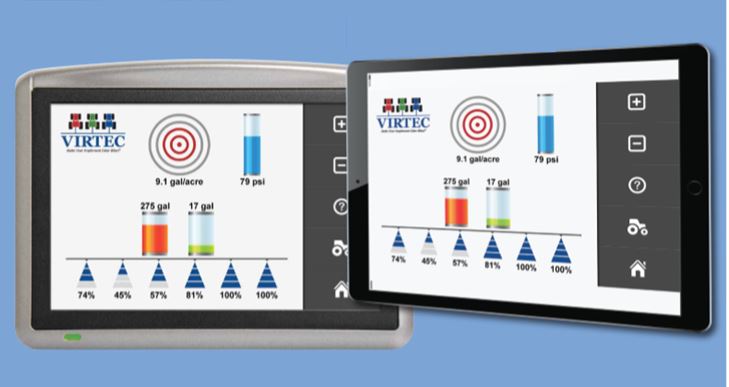 DISTek is excited to announce the newest member of our ISOBUS product portfolio:  VT Anywhere.  We are by no means product-naming experts around here, and this one seems aggressive.  Perhaps it is a bit presumptuous to say “VT Anywhere,” yet we did anyway.  Does it really live up to its name?  Read on to find out.

First, I will start with a quick primer on ISOBUS VT in general.  ISOBUS seeks to allow seamless communication between the electronics of Ag vehicles and implements across various manufacturers.  One of the applications for ISOBUS is the Virtual Terminal – VT – which provides a graphical user interface in the vehicle cab, allowing an operator to view and control various implement parameters.  The implement decides what widgets should be shown to the user on the VT and all the communication between the implement and VT is standardized.  You may have also heard this described in AEF speak as Universal Terminal – UT – which is the marketing term used to describe this feature for end users of equipment.  Since the technical standard, ISO 11783, continues to refer to this as Virtual Terminal, we typically do as well at DISTek since we engage with engineers as our customers rather than end users.  AEF also uses the term Client to refer to the logic on the implement side and Server to refer to the logic on the vehicle display side.

DISTek has had our VIRTEC software library available for VT Clients for a number of years.  At DISTek, we strive to make flexible software which is hardware independent, and we have proven to be successful with that approach on VIRTEC.  So when we set out to make a VT Server, we again wanted it to be hardware independent.  This is enough of a challenge when talking about making embedded C code work on a wide variety of platforms, but VT Server requires actual rendering of graphical objects.  Several options exist to target different operating systems and CPU architectures, but the path we chose, which we think targets the biggest set of displays, uses HTML5 technologies.  Our solution involves two primary components:  1) a compiled module which implements the back-end logic for the VT Server function; and 2) a Javscript module which implements the graphical rendering front-end logic of the VT Server function.

Focusing on web technologies and using this split architecture has allowed us to successfully deploy to a wide variety of different systems.  We have customers with a more typical solution of a rugged CAN-enabled Linux or Windows display.  One of our customers has a WiFi-enabled ECU communicating to an Android tablet or iPad.  We have customers with telematics/data dongles that connect to the CAN buses and also use a wireless link to a consumer tablet.  And we even have customers using this on a PC with a USB-CAN dongle for engineering and training purposes.  That list covers a large number of potential display solutions, though it is not quite “anywhere” and I am sure we can find some example display solutions that would not run VT Anywhere without some major work.  But for typical modern displays that are expected to be used for a VT Server, we think we have covered the breadth of possible solutions.

And besides, the name VT Almost Anywhere Except Where You Would Really Not Want To Use It is probably not the best product name.