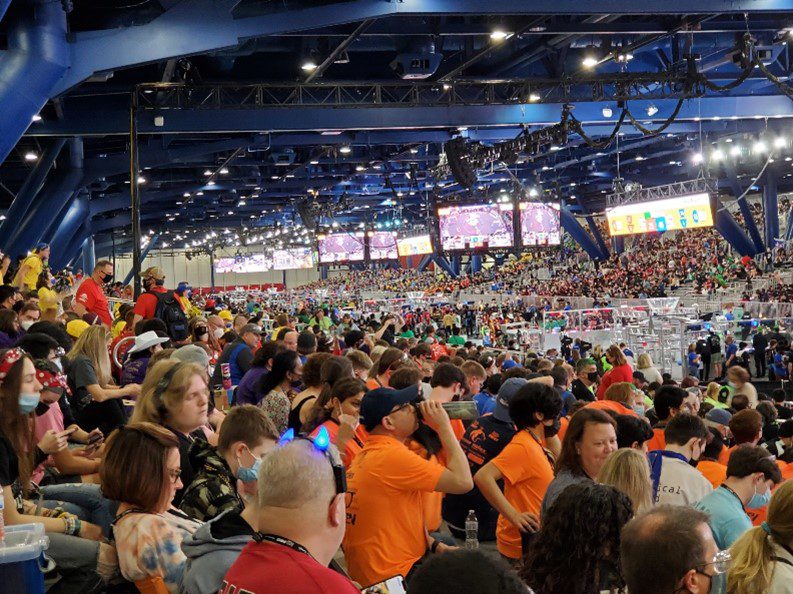 In Part 1, I discussed the roadmap to getting to 2022 FIRST World Championships. Now, in Part 2, the excitement level really kicks up with competition time!

This year the competition was next level. For the past several years, FIRST has held two separate Championship events where teams were assigned depending on their home location. However, anticipating the number of registered teams would still be severely reduced due to Covid, FIRST cancelled one of the Championship events, leaving only the one competition in Houston. This meant that the number of teams advancing from qualifying events throughout the season was reduced. The teams that did advance were of a much higher skill level than in the past. Robots that dominated at regular season events were just one of many at Worlds. This made the level of play extremely high and each match exciting to watch with plenty of buzzer buster moments.

A great advantage of only holding one Championship event was that our students could see legendary teams in person. There are a handful of teams in FRC that are famous for their continued success with spectacular engineering, sleek designs and winning competitions. We anxiously await their robot reveal videos early in the season and eagerly watch live matches online to see them perform throughout the spring. One part of our robot game included climbing a set of bars increasing in height overhead, much like monkey bars. This year, one team had become famous for designing a jumping robot. While most teams started at a low bar and climbed to the higher bars, this robot jumped from the ground directly to the high bar. Seeing this robot jump live was a highlight for many.

Going to Worlds is so much more than just participating in an FRC competition. In addition to watching competitions and visiting pits for the other FIRST programs, there were different concerts and games out on the lawn in front of the convention center, along with vendors where you could check out the latest and greatest robot building parts and other gadgets. College Row was available for students seeking information about different colleges and scholarships. A favorite destination is always the Innovation Fair where many businesses showcase their engineering designs and products showing students what the industry has to offer and what they may be able to help produce one day. There are many hands-on activities to try and much swag to collect, including a scavenger hunt. Of course, the trip would not be complete without a visit to the FIRST store to purchase a souvenir.

The most rewarding “extra” we loved during the event were the numerous conferences available. Different teams and businesses held short sessions on topics including running a team, manufacturing, programming, writing award winning essays, college prep, 3D printing, equity, diversity and inclusion, building student leaders and so much more. Many of our students and mentors took advantage of these conferences, learning a lot of new tips and tricks to apply to our team.

When Covid hit, abruptly shutting everything down in 2020, we had just started the 8-week competition season, so there was limited competition experience on our team when we began the 2022 season. Since the last Worlds was held in 2019, only 2 of our seniors had ever attended that large of an event. This was actually one of the biggest changes I noticed resulting from the isolation of Covid. With so few older students to teach and guide the younger students, it felt like some of the history was lost. When going to competitions and especially Worlds, it’s fantastic to renew the connections and friendships you’ve made over the years, see the people and teams to reminisce about the great moments of competitions you attended together or the parts you borrowed from them to fix your robot. This element seemed to be missing for the students. They did not know teams that we had cultivated relationships with over the years, nor did they know what teams were generous in helping in different areas. I think this was something that surprised our mentors because we didn’t even think about it.

While the celebrations were spectacular, they were subdued from years past. Historically, the closing ceremonies were held in a stadium-like venue, such as an NFL stadium and were typically a time of music acts and motivational speakers and even a visit from a famous droid – R2D2 looks much bigger in person. Dean Kamen, the founder of FIRST, usually gives us all a homework assignment for the upcoming year. This year we stayed in the convention center. We still had a few speakers, but not the music acts or the homework.

For our team, we ran into some computer problems causing our robot to perform more poorly than we would have liked. On the plus side, our team was chosen by one of the top teams for the tournament portion of the competition which was fantastic. Our alliance lost in the quarterfinals, but I don’t think anyone was very upset about the results. For us, just being at the event was inspiring.

I have to say, to me, the most amazing thing that came out of our trip to Championships wasn’t the fabulous competition or the informative conferences or any of the other unforgettable and awe-inspiring activities that different teams and students had done. It was the dramatic increase in motivation of the students. Before we left, everyone was excited, but it was almost like they were waiting for something else, for someone to do something for them. After the event, they came away energized and full of ideas for the off season and beyond. The group even spent the ride home from Texas pouring their thoughts and ideas onto paper. They created a document outlining robot improvements, outreach events, training to give and take, team bonding activities, recruitment, community service, fundraising and so much more.

Over the last several months, this fire from the students has not diminished. They have planned and held team bonding events, scheduled CAD training, and even planned and entered a float in the local Sturgis Falls Celebration parade. They have ideas for designing a turret for shooting on our next robot. We’ve also had a record number of students apply to be on our student leadership team for the next school year. They are so much more engaged, and it is awe inspiring. I can’t wait to see what comes next!